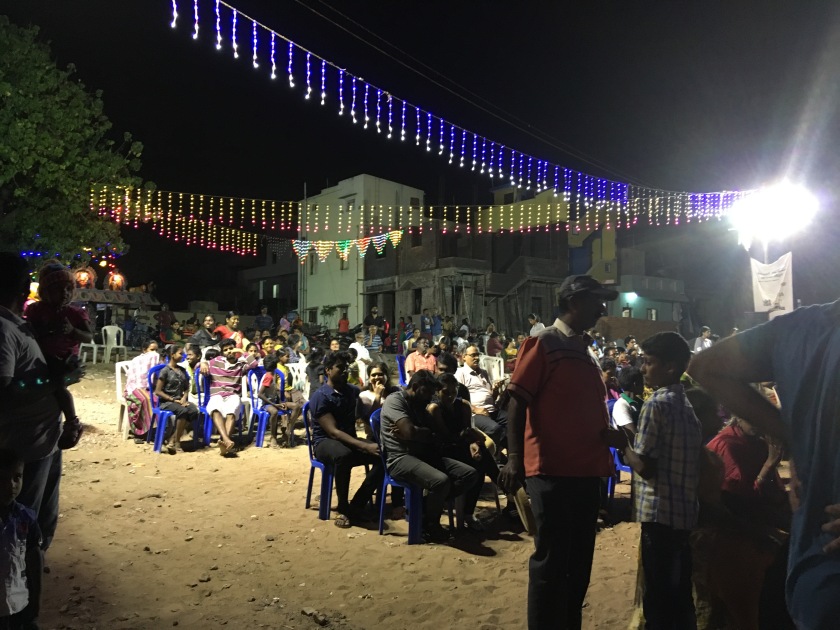 You could say that the Urur-Olcott Kuppam Vizha began on the day when Carnatic musician TM Krishna walked into the offices of the environmental activist Vettiver collective and talked about a festival in an unexpected place. Or you could say it started 11 years ago, with Nityanand Jayaraman and the Vettiver Collective’s own Justice Rocks events. Or maybe you have to go back to when a young man, Vizha organiser K Saravanan, was persuaded by his teacher that turtle eggs mattered. What becomes clear from talking to the organisers, villagers, artists, volunteers (not mutually exclusive groups) is that the festival can mean different things to different people, because it is not a stand alone art event, but embedded in a network of aspirations, actions and campaigns along the Chennai beaches.

What surprised us most was the formal inventiveness of the music and dance performances, and the political content of songs and narratives. Not because we assumed naivety, but because we expected the politics to be in the curation of the combined events, rather than integral to each ‘number’. Instead, even within each individual piece, there  was often a deliberate meeting – even clashing – of old with new, elite with popular, Tamil with North Indian and so on. The result seemed a truly inclusive event that appears to be making some concrete differences to the two villages Urur and Olcott, by making their concerns more visible. Literally concrete. One of them is a slip road.

However, it’s important to recognise that two nights of festival and a beach cleanup does not accomplish this by itself. For one thing, Saravanan describes the  Vizha  as a sequence of events, like a river, beginning its course last August, flowing through the railway station, bus routes and fish market to reach the festival on the shore. For another, it sits alongside other, ongoing attempts to map and defend the use of the ‘commons’, the beaches that are the fishermen’s livelihood.

It was fun. Let’s not forget to say that. Sitting or standing in the warm breeze from the sea, the scent of jasmine from the girls’ hair, the taste of fried chilli and hot tea, the coloured lights and glowing costumes and the sounds of the drums… the senses overwhelmed but not exhausted. And the beautiful moment when a flock of flamingos filled the evening sky. These are moments when you feel glad to be alive. Let’s not forget that, too.