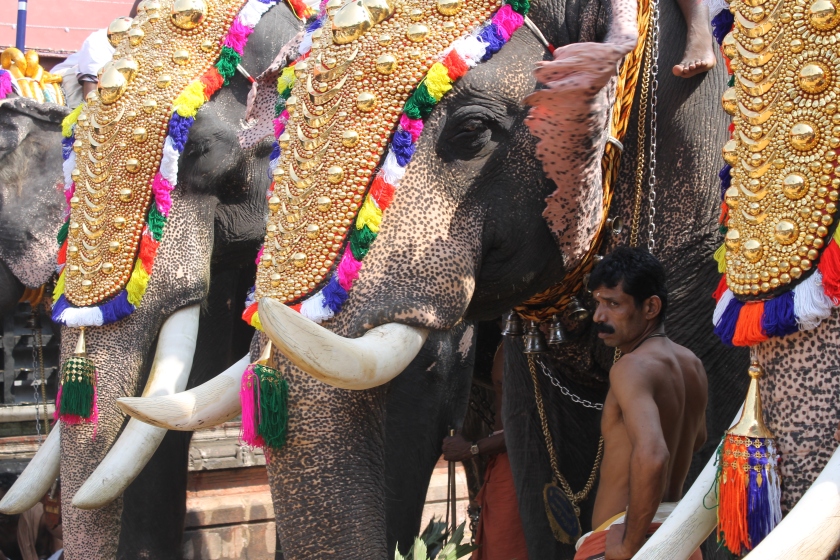 It is illegal to capture elephants from the wild, and for this and other humane reasons, the Keralan temple festival, with its array of performing elephants, may be a dying form.

These elephants are already captive. Might they be better off without performing? Sreedhar tells us of a number of measures that have been taken to mitigate negative effects on these elephants: bringing in double the numbers to allow for rest; evaluating levels of stress in individual elephants to make the best selection each day; arranging them, not in order of height, but in terms of their relative friendliness towards each other; looking for signs of injury or physical ailment, and not forcing an elephant to process during musth or in other sub-optimal circumstances. He works together with the vet, on hand throughout the festival, to advise on the choice of the fifteen elephants that form the daily procession during the Vrishchikotsavam at the Sree Poornathrayeesa Temple in Tripunithura.

We watched the various groups of people under, on and around the elephants, and thought about the various small economies that are sustained by their appearance. The mahouts, of course – these do not perform, but sit behind the elephant’s front legs, or place a restraining hand on the tusk. But also the laughing, show-off accoutrement-bearers sitting on their backs, twirling parasols. Then the makers of the parasols, head-dresses and other objects. The elephant owners, I suppose. The traffic controllers and drivers. The vendors selling nuts, toys, chilli snacks and water outside. How would this event change, without its star attractions? Without the elephants, would all these crowds come to hear the drumming?

Are the elephants performing? Is it anthropomorphic to say so? On the way back, Jerri, Anindya and I discuss whether there is also a risk of assuming that the animals understand too little. When they walk, are they aware of being looked at? What does it mean to them? How do they experience the pancharimelam (percussion ensemble)? To wonder whether an animal in chains enjoys any part of the experience seems risky, and one can’t deny that the relationship between the mahout and the creature is one of dominance. However, elephants do respond to rhythmic sounds. Is the clamour of horns, clash of cymbals and crescendo of Chenda drums unbearable? Or was that elephant deliberately flapping his ears in time? The effect on humans could go either way, and the hours of percussive sound can feel tortuous or hypnotic, possibly both. Should we assume all elephants experience them in identical ways?

Outside the temple, people crowded around a small, plastic elephant, a model of a deceased star. When one sees photographs of decorated elephants in rows, it becomes too easy to think of these creatures as objects, like so many paperweights in a novelty shop. Thinking of them, and treating them as individuals, seems part of an ethical approach to their experience.